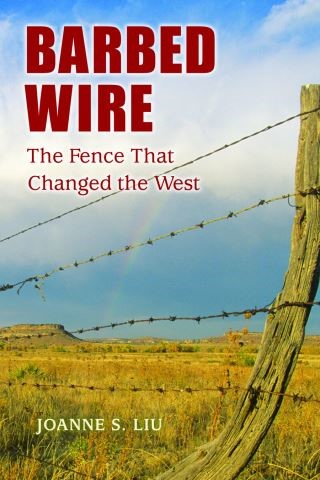 The Fence that Changed the West

Before the mid-1800s, much of the American West was a vast expanse of open plains. Native tribes followed buffalo herds unimpeded for hundreds of miles, cowboys ran cattle wherever water and grass led them, and the cattleman’s Law of the Open Range ruled. All this changed when settlers pouring into the West under the Homestead Act of 1862 brought with them the Eastern farmer’s concept of fencing in farms. With the invention and mass production of barbed wire in the 1870s, it soon became possible for homesteaders to fence off millions of acres of what was once open range. But barbed wire threatened the livelihood of the cattlemen who depended on unfenced grasslands, and a clash of cultures was inevitable.
In a style that will capture the interest of adult and teen readers, Barbed Wire: The Fence That Changed the West reveals the surprisingly critical role the invention of barbed wire played in the settling of America. From the legal battles over barbed wire patents to the brutal fencing wars that erupted on the frontier and the ultimate end of the open range, author Joanne Liu tells the fascinating story of how a simple twist of wire transformed a country’s landscape and ushered in a new way of life.